After I wrote my first blog my daughter told me that I would need to write new ones quite regularly, because, as Punch said to Judy, ‘That’s the way to do it …’ This was quite a shock, although it has nothing to do with Punch sounding loud and shrill, and everything to do with ‘quite regularly’ sounding like a job. The blog started over concerns about an environmental issue and rather stupidly I hadn’t thought much beyond that. There are a couple of other concerns as well, and my friend Colin put his finger on one of them straight away, ‘the trouble with you,’ he said, ‘is that you usually say what other people are just thinking’… and in these politically correct times that could be a problem. Assuming that I do have readers, I will eventually upset them all and end up writing for myself, which begins to sound less like writing and more like therapy; and that brings me to my second problem… I’m not sure I’m bothered.

The Canadian fish eagle – sometimes known as the bald eagle – is quite something. When living in England I lived at the wrong end of the U.K. to see Britain’s, or more properly, Scotland’s national equivalent, the golden eagle. You’re best chance of seeing one of these would be to travel to the Western Highlands and get well organised for a photo opportunity. There are around 440 pairs nesting in the U.K. and I have only viewed single birds in flight, none of them near a nest.

Then, I moved with my family to New Zealand where you can forget about seeing eagles altogether; most of the interesting native avians are either extinct or moving down that rocky road to oblivion; although New Zealand has been a land of birds and so it is no surprise to discover that there was once an eagle in the mix – Haasts’s eagle, the most impressive tick for a birder that can be imagined – and I don’t mean that in the parasitic sense, although the bird may well have had species specific ticks that disappeared when the bird did. The great thing about this eagles is that it was the largest predatory bird ever known to exist. Sadly, Haast’s eagle disappeared about the same time as nine species of flightless moa which were all hunted to extinction by Maori around A.D.1400. With their prey gone, the eagles quickly climbed the stairs to stuffed, or more precisely, to ossification. Imagine if you can, 35 lbs (15 kg) of bird in flight, the estimated upper limits for a large female… extraordinary, and I missed the picture by around 600 years, but it wasn’t personal, so did everybody else. And right now you’re probably Googling the bird’s name to see if I’m fibbing.

Over the years I’ve made many trips to the United States but it was a long time before I saw my first bald eagle. To avoid confusion I use the bird’s American name although I don’t feel obliged to do so, vultures are bald but eagles for the most part are not. In the middle ages ‘bald’ would refer to a patch on a stock animal, but an entire bird’s head is something else. I love America, but let’s face, it, Americans are none to precise with words – in reality a bathroom isn’t a lavatory, and if an herbivore is an herbivore, how can an herb be an ‘erb’ What’s that about? And ‘The World Series’???… Let’s not go there.

Sorry I digress, we all know what a bald eagle is, but they were certainly less frequently seen during the 1980s than they are today in every state in America, but the bird did manage to cling on and breed in a few of them, including Florida which is where I had my first encounter with this wonderful eagle in the Everglades. Startled from its resting place in a tree, the poor creature almost fell on top of me as I quickly tried for a picture with the 200mm lens that was attached to the sharper end of my camera. Unfortunately the eagle was far too close for a long lens and by the time its feathers came into focus the bird was moving away and quickly hidden by foliage. If I had failed so completely and missed the photo in almost any other state my story might have been doubted, but in Florida seeing a bald eagle was very believable and nobody had reason to question it. I had nevertheless missed the shot – photographers see things differently, they freeze away packets of light while others have life experiences; they store away little capsules of time to be viewed at a later date, although any picture that has been recorded successfully is soon forgotten. It is the ones that get away that are remembered forever, or more correctly… remembered until you die.  A photograph on the other hand need not suffer oblivion, but it is as well to consider that there are as many bad photographs in the world as bad memories; and by that I mean memories are unreliable, while photos – if we exclude photoshop – pin down a certain kind of truth… I know, we could argue that one all day.

If you are out in the woods – don’t let one of these fall on you.

In British Columbia, where I now live, people can be complacent about their Canadian fish eagles, because the birds are so frequently seen, but that could easily change as habitats become degraded or destroyed. In the United States the birds have survived in part because they have a wide distribution. Early in the 20th Century they were hunted mercilessly because of the fear that as predators they might eat young stock animals, in particular lambs. Nobody at the time had heard of trophic cascade and many still haven’t. The term describes the important role that top predators play in shaping ecosystems or even landscapes as they work the top end of the food chain and the results tumble down through the system. Only recently has this process become more clearly understood and eagles are certainly up there amongst the top carnivores when it comes to ripping at the tapestry of existence.

Having survived an initial assault with guns the eagles would plummet in numbers again around the middle of the 20th Century with the widespread use of the pesticide D.D.T. which would accumulate in the bodies of many predatory birds and cause eggs to suffer from a thinning of their shells which were easily broken before the embryos inside had a chance to develop fully. Many raptors would totter precariously on the edge of existence until D.D.T. was banned in 1972; it takes about 15 years for the pesticide to break down in the natural environment, and so it was a while before fortunes changed and eagle numbers began to climb.

In the United States the bald eagle appears on just about everything from national seals to custom paint jobs on Harley Davidson motorcycles – a perfect example of the power of visual imagery, but you have to wonder how the bird might have faired had it not been politically expedient to save it. More generic eagles with less literal forms show up on the coats of arms of more than twenty five countries, but there has never been a closer association with a single bird species than the United States has with the bald eagle, except perhaps the relationship that New Zealanders have with their namesake the kiwi.

In British Columbia and Alaska, this fish eagle might be described as common, which is perhaps why it is taken for granted. During the salmon run, the fish move some distance inland along the rivers of the North West coast of North America to spawn and the eagles, congregating in numbers, rely heavily upon them for food. When the salmon stop running the birds behaviour changes and in late winter an early spring they move off to their traditional nesting sites, many of which are now threatened by development, especially when bordering urban areas, which in lower mainland B.C. is becoming increasingly difficult to avoid. Urban eagles can cope with some human disturbance, but increasingly there are fewer places for them to hunt while they are tied to the nest feeding young.

I have been fortunate to record eaglet rearing activity at my local nest over the last few years, which will attest to their presence should they finally run out of prey and are forced to move away; certainly things appear to be moving in that direction. In 2012 two eaglets fledged successfully on the local nest; last year there was only one eaglet and this year one again, after the adults were forced to rebuild when the old nest fell during a winter storm.

Under exceptional circumstances a pair of Bald, or Canadian fish eagles  might rear four youngsters; three is hopeful, but two is more usual, or rather the laying of two eggs is more usual. The rearing of only one offspring is common enough, but doing so season after season suggest a lack of available prey – perhaps they could do better under more favourable circumstances. At least two other nests in the area also managed only one youngster during the 2014 season.

Nobody it seems can remember a time when there weren’t eagles nesting here; people have become so used to seeing them and may be unaware that the birds could be lost to the urban developments spreading across the surrounding woods and farmland. Close to the park’s borders this process has been startlingly rapid over the last couple of years, which is unsettling and casts doubts over the longterm viability of the nest and I really hope the adults manage the increasing distances they will need to travel to hunt down prey. Whatever happens, it has been a privilege to have spent time watching and photographing these wonderful birds. 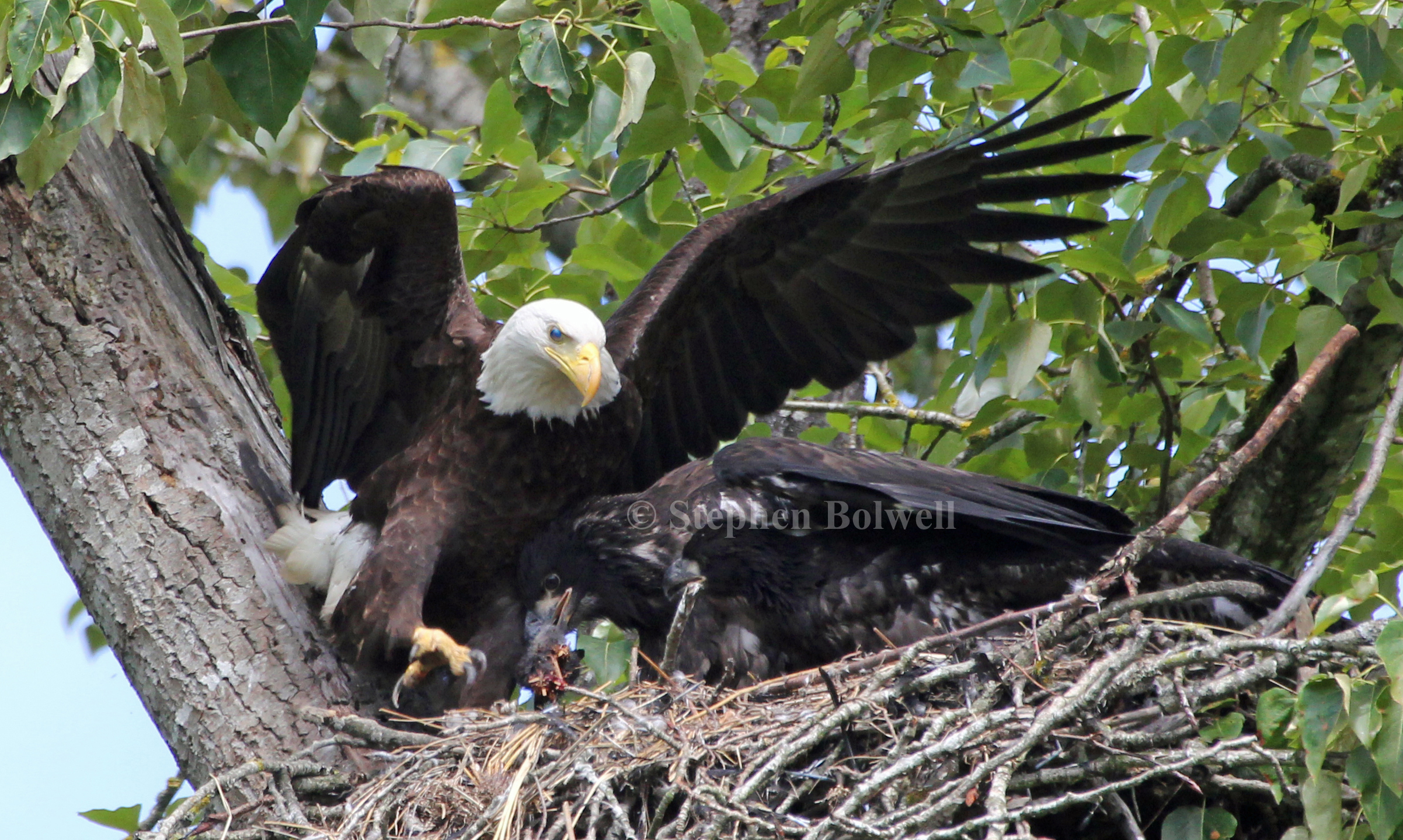 An adult drops food, quickly grabbed by the dominant eaglet.

If planning departments are prepared to give over land designated for agriculture, along with natural areas in and around urban locations, then many native plants and animals will inevitably disappear from the landscape and our lives will be the poorer for it. Only a few people will gain financially from intensive house building, whilst the majority will see little benefit. Living closer to nature has been demonstrated to be of great benefit to our health and this is increasingly denied to a great many people. Essentially, we will move past the point where there are teachable class sizes at local schools, or reasonable waiting times in the emergency rooms of hospitals. It is of no great benefit to the majority to push urban density to the levels we expect to find in cities, but few of us are allowed any part in the decision making. As a neighbour recently pointed out, ‘When it comes to development, money talks and b/s walks.’ And that pretty much sums it up. Urban development programmes should not be ruled by a minority who are turning a buck at the expense of the majority, and above all else financial gain should not be allowed to push intelligent urban planning into second place.

Next time: If You Can’t Take a Photograph a Painting Will Do.

With thanks to Harold Myers for providing details on local nests. Thanks also to Colin Shotter and Penny Beck.